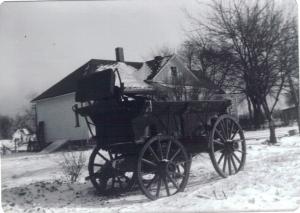 A wagon used to haul coal from the Rocky Glen area, in front of the Eaton’s family home, photo from the 1920s. 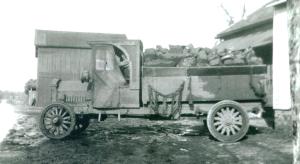 A truck used to haul coal from the Rocky Glen area, photo from the 1920s.

On a recent summer afternoon, Jim Eaton searched his memories of Rocky Glen, where he played and hiked as a

boy, then worked hauling coal during high school.  “There were coal mines along the creek, from Pottstown to Bartonville,” recalled Eaton, now 91, “a series of mines, active until after the war.”

His friend Walt Eisele, who joined him in recalling Rocky Glen, has similar memories. He also hauled coal, with mules pulling the wagons, or steam engines pulling coal out of the slope mines, he remembered.  Eisele also offered a confession. He once carved his initials, WEE, on the limestone at the waterfall, he said. He and his friends also sneaked into orchards on top of the glen, and took apples, he recalled. “We’d go in and steal the apples.”  He remembered the sassafras growing along the road, waiting to be picked to make tea. You can’t get anything like it now, he said.

Eaton’s wife, Florence, and Eisele’s wife, Gert, also remember Rocky Glen, as a place to hike and picnic.  Eaton said his grandfather came to American from Germany in the 19th century, and was married in 1893. He hauled coal for a living from the Rocky Glen area.

His family lived in what is now West Peoria where the Eatons still live. “My uncle, Otto Santo, loved horses.” His

brother, Tony Santo loved trucks, he said. The two would argue endlessly over whether horses were better than trucks.” The trucks won, he said, because they “didn’t take as many men to haul the coal.”

Are you interested in participating on one of our work days? Check out our Volunteer – Restoration page for more information.

Promote Your Page Too